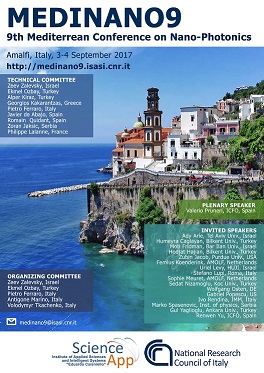 The Institute of Applied Sciences and Intelligent Systems (Cnr-Isasi) is hosting the 9th Mediterranean Conference on Nano-Photonics (MediNano-9) on 3-4 of September 2017, in Amalfi, Italy.

Nano-photonics is one of the most appealing fields having large variety of academic as well industrial applications. MediNano is an international gathering inviting participants from research institutes and industries in countries surrounding the Mediterranean Sea to present their most recent results as well as review of concepts in various topics related to nano-photonics.

The previous meetings had more than 100 participants on average from more than 25 countries (mostly but not only Mediterranean) presented the highlights of their recent achievements in the field of nano-photonics.