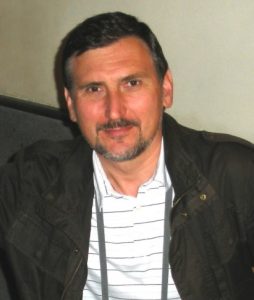 Volodymyr Tkachenko graduated in Radio-physics from V.N. Karazin Kharkiv National University (Ukraine) on 1980. He worked there as a researcher at Quantum Radio-physics Department investigating laser cavities, waveguides, and laser systems for exploration of high temperature plasma in Tokamak fusion reactor, and of semiconductors and polymers in infrared and THz wave ranges. In 1998 he received the Ph.D in Radio-physics from V.N. Karazin University with a work on terahertz molecular lasers with optical pumping.

Starting from 2003 he is a researcher of CNR where he received the permanent position on 2008. He was with SPIN Institute till August 2015 and after that he has joined ISASI Institute.

His current research activities include ellipsometry, magneto-optics, and photonics of liquid crystals, organic-inorganic composites, and metamaterials in a wide electromagnetic range from visible to THz.

He is an author of 2 patents of Russian Federation more than 30 papers in international peer reviewed journals, 1 invited book chapter, and more than 50 presentations at international conferences (11 invited).

He participated in various scientific projects, among which PRIN, bilateral Spain – Italy project, and projects funded by NATO and INTAS.