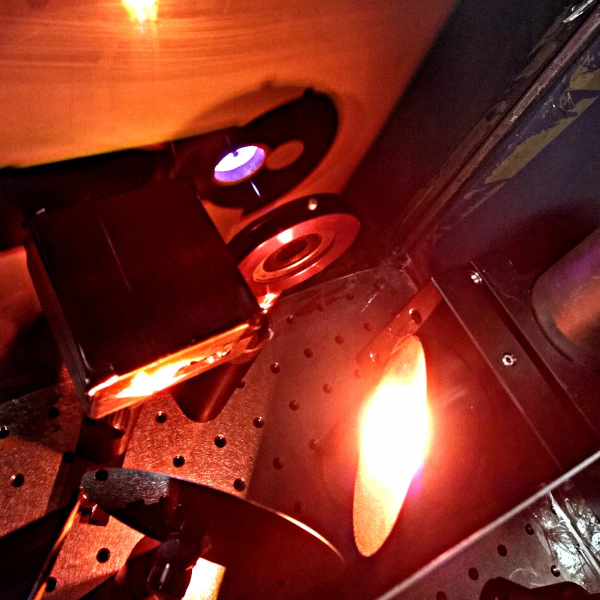 Description of the activity

We investigate various aspects of light-matter interaction by using ultrafast (femtoseconds) intense laser pulses. The processes that are nonlinear in the optical field add new potentialities to standard optical spectroscopy, which is an invaluable tool for elucidating fundamental mechanisms in condensed matter physics. For instance, by exploiting second-order processes we investigate surface and interface properties with sub-nanometer resolution (Second Harmonic Generation – SHG). Another example is given by two colors Four-Wave-Mixing in air, which we exploit to generate broad-band THz pulses, so to expand our spectroscopic capability to the very-far infrared region. The THz pulses generated in this way are intense too, thus enabling the observation of nonlinear effects until now investigated only in the visible range of the electromagnetic spectrum. This is the case of the coherent THz Hyper-Raman (THYR) effect, which we have recently discovered (see figure). The same pulses are used for implementing Broadband Time-Domain THz Spectroscopy (THz-TDS).
We apply our spectroscopic tools to a large variety of materials with a special focus in recent years on the hetero-structures of strongly correlated transition-metal oxides, ultrathin ferroelectric films, laser-treated diamond for THz applications, ionic liquids and bio-systems, including marine microorganisms. The latter two themes are developed with a special emphasis on the topics of ‘Green Chemistry’ and ‘Blue growth’.